Now, it is the time that the stable release of the latest version of Android is released for the said smartphones and OnePlus has done exactly the same. OnePlus has started to roll out the OTA update to the OnePlus 3 and the OnePlus 3T with OxygenOS 5.0. This latest update, as we all expected, comes with the first stable build of Android 8.0 Oreo for both the smartphones. Also, keep in mind that OnePlus already announced the Android 8.0 Oreo update to be the last major OS update for both the devices. We have also linked the Download files below for the OnePlus 3 and OnePlus 3T so you can download them and install the update on your smartphone.

Good News is the Latest OxygenOS 5.0 Android 8.0 Oreo For OnePlus 3 and 3T Has started rolling out. The OxygenOS 5.0 for OnePlus 3 and OnePlus 3T rolling out via OTA and soon will be available for all.If your device is not rooted then you may have already received the OTA Update.Go to settings > about phone > software update.If there is no update showing on your device, then wait for few more days or just follow the guide to manually Download and Install OxygenOS 5.0 On OnePlus 3/3T

How to Install the OxygenOS 5.0 On OnePlus 3 and OnePlus 3T 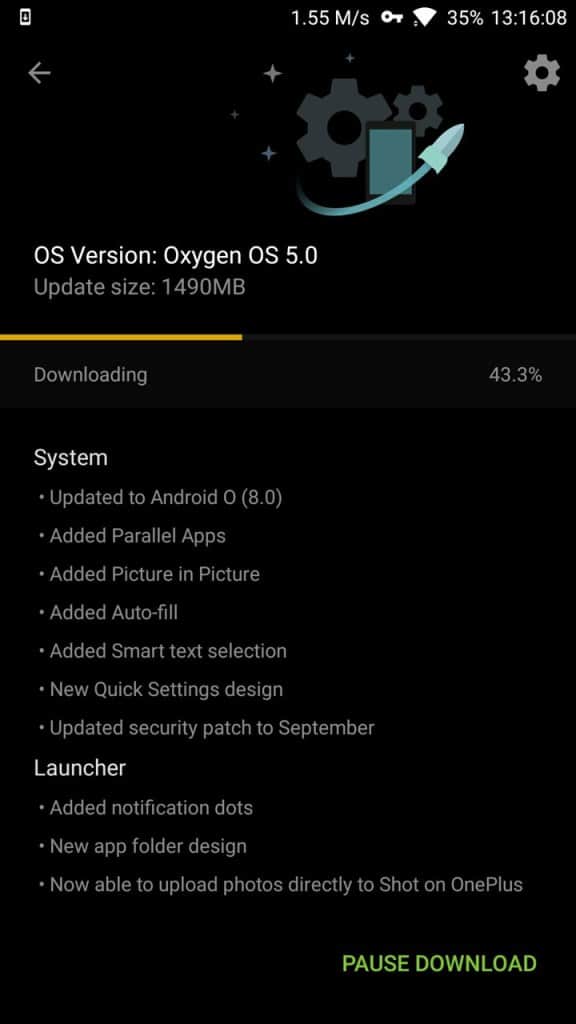 2) Download ADB and fastboot driver for windows or ADB and Fastboot for Mac and install it on your PC.

3) Download the OxygenOS 5.0 for OnePlus 3 and OnePlus 3T from above Copy ROM to a folder where adb installed.

4) Now Turn Off your phone and boot into recovery mode.

6) Now Connect your phone to Laptop/PC

8) Now check your connection by typing the below command

if your device is listed, you’re ready to flash the ROM

9) Flash the Oxygen OS 5.0 on OnePlus 3 and OnePlus 3T by typing below command

10) Now wait until the process completely and then Reboot the phone.Done!

1) Download OxygenOS 5.0 OTA zip file from above and save it on your internal phone memory.

4) Now your device will reboot into stock recovery and flash the OTA.

5) The installer will flash the OTA itself and reboot the device.Done!!!

1) First Unlock your device bootloader and Install TWRP on your Device. Skip this step if already installed TWRP.

2) Reboot your device into Recovery mode and create a Nandroid backup (Recommended) of your device for safer side, if anything goes wrong.

3) Now wipe your cache files by Goto Wipe>Advanced Wipe>Select Wipe cache and Dalvik cache and swipe to confirm it.

5) Now Flash the Magisk Or SuperSU again to maintain the root (Optional).

Let us know your feedback on OxygenOS 5.0  for OnePlus 3 and OnePlus 3T in the comment section below.